For as long as I can remember I have been attempting to cajole humans together into new relationships with each other and machines. It sounds like a rude undertaking, somewhat like chaining oarsmen to an out-of-control Trireme, but it really stems from a revolutionary itch in my Quaker family going back several centuries. My great, great uncle had set up a safe-house on the underground railroad and two of my Irish ancestors, Anna and Thomas Haslam, were very active in early feminist circles and kept a correspondance up with the likes of John Stuart Mill and Marie Stopes. Carmel Quinlan recently wrote a book on The Haslams called "The Genteel Revolutionaries."

My goal has always been to experiment with alternatives to the standard routines, to search for new kinds of protocols which transcend the assumed functions of technology. My first formal ritual took place in art school at Carnegie-Mellon University in 1980. It involved taking several friends up on a rooftop, passing around orblike bowls of water and watching the moonlight flicker in the tiny waves.

One of the participants was my girlfriend at the time, Karen Ellzey, who was quite disposed towards aesthetic experimentation. Another friend, Michael Chabon, genuinely through himself into the endeavour. He was reading Graves' book, The White Goddess, at the time and may have assumed that the act was another expression of Euro-American goddess worship. Rebecca Bogart, Michael's girlfriend at the time, took the whole thing in stride. In anycase the three of them were good sports, even when I brought out the chicken feathers. I'm still waiting to see some sliver of that moonlight reappearing in a dream in one of Michael Chabon's novels.
.
My next ceremony, "Viscera," was conducted with a bit more apparatus at MITs Center for Advanced Visual Studies in 1986. That was followed by a string of immersive theatre experiments unleashed by my multimedia rock band, Nerve Circle. After a loft performance was wiped out by the Boston police and 200 guests were marched into the street, I decided it was time to move to New York. In 1988 I moved to Williamsburg, Brooklyn, and transformed Nerve Circle into a label for exploring simpler, community-oriented rituals. Inspired by the saltier, more rugged modalities of underground night clubs and the "poor theatre" of Polish theatre director, Jerzy Grotowski, my interest has always been to immerse audiences in a matrix of appropriate and accessible technologies. My search has been for deep functionality, for the vital and often weedlike integration of people, machines and environments.
.
For me, the idea of immersion, of deep interpenetration of systems, began with that first ritual in the moonlight. But the idea was eventually scribbled down as a theory in my notebook in the Spring of 1989. I had arrived in Brooklyn just months earlier and the young artists, musicians and filmmakers I met seemed equally hungry to immerse themselves in each other and the burned out industrial warehouses and storefronts. It was a neighborhood poised for reinvention. The Polish and Latino communities just North and South of the "dead zone" also seemed to be going through a transformation. Coalitions were forming between unlikely groups to prevent New York city's power elite from completely gutting the borough and installing unwanted garbage incinerators. Immersing oneself in such a neighborhood left little room to fuss over the cultural orders across the East River.
. 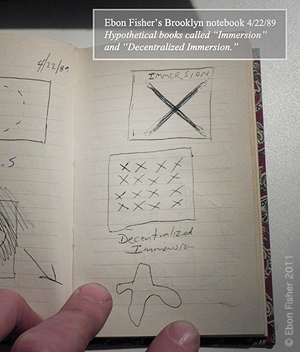 .
Engineering Open Source Primal Rituals
.
In a radio interview a few years ago, Iggy Pop talked about his desire to introduce a primal element into his rock spectacles. He didn't just wake up one day and start writhing on stage. He did the research and engineered his inner animal right into his stage protocols. I was a mere boy when Primal Scream Therapy was getting under Iggy Pop's, Yoko Ono's and Patti Smith's skin, but I was aware of the discourse and found deep satisfaction in dancing to its various musical permutations. An entire heap of Post-war, humanist psychology popped into my parent's copies of Psychology Today Magazine and slithered from the lips of my parents' more bohemian friends. In my years of formal pondering, a period that began pretty much at twelve and hasn't subsidded, I have felt compelled to fold into the primal equation bits and pieces of information and media theory, a fountain of cybernetic psychedlia springing from the likes of Claude Shannon, Marshall McLuhan and Donna Haraway.

So, like Iggy, I didn't simply throw some funny rituals together for a laugh. They were deliberately designed to tease out and redirect primal biological urges. I have kept my media rituals simple for the sake of ruggedness, transparency of coding, and familiarity. Simple, accessible codes invite participation and allow much stranger phenomena to emerge. Thus it is possible to encode these projects in a diagram, but difficult to define the results. A social organism is somehow crawling into formation. It's a raw, messy and unpredictable process, despite the precise lines of communication at work within them. No matter how carefully I prepared the superstructure for a ritual, its meaning tended to spill over its guidelines.
.
Network diagrams of these rituals have been provided with musings on their implications. They are open source experiments in human-machine relationships. They can be played with freely by any user and coded into endless permutations. They are the seeds from which my Bionic Codes and Zoacodes emerged.

I like to think of these rituals as a kind of bionic haiku. Their effectiveness stems from their simplicity. Too much stress on cutting edge effects puts the technology front and center rather than the bionic system as a whole. I have seen groups of hacker-roboticists concoct drop-dead gorgeous spectacles, but their genius and insight is ultimately private. The public rarely shares in the code and the deeper, creative passions. The result is often a marvelous special effect masking what is essentially a demonstration of power. Only when the significant coding of a ritual is openly shared, whether it's social or machinic, can a collective ethos emerge. Significantly, only then can the code be transferred to a wider public via the media. The code of a ritual, whether it's the laws of a democratic government or the principles of a web jam, must ultimately be able to transcend its initial operating system to survive.